A couple of weeks ago, I made my first trip to Guilin in Guangxi Province, China.  We actually stayed just outside of Yangshuo instead of in the city of Guilin, as that's the area where the really beautiful Karst rock formations are.  The spot we stayed in was secluded and quiet, and great for cycling.  I went one afternoon  on my own, and the next with my friends.  Both days were fun, with the day I went alone being the best cycling trip I've had in a while — probably a year or so.

Here's a shot of the narrowest section of path.  Just past here, it got steep and muddy, on top of being narrow, so I had to push the bike for a few minutes there or risk slipping into the muddy, wet rice paddies. 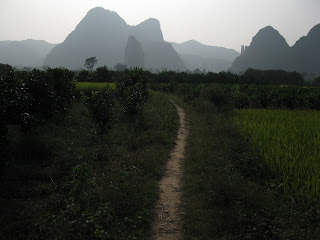 After finding my way across some paths like this through the farmland, and some wider, pot-holed filled dirt roads, I finally got close to the bridge I was aiming for. The problem was that every time I stopped to ask how much further, the answer was always, "About 4 kilometers," no matter how far I'd traveled since I last asked.  At one point, the answer was, "That's it in the distance.  The road there still winds around a lot and will take you a while to get there.  I don't think you'll be able to get back home before dark if you go all the way to the bridge."  The advice on an alternative route was to cross the mountain and take the bamboo raft across the river instead of heading up to the bridge.  I followed the advice, which led me on a bit of a rough but beautiful ride, and I'm glad I did.

All in all, even though I didn't make it all the way to the bridge I'd thought I would get to, I am glad I traveled the path I did.  It was fun, and I got to see parts of China life that most people miss out on.  That's one of the joys of cycling when you travel — you're going at just about the right pace to really see the countryside, and yet see a fair bit more than if you were walking.

It sure made me wish to make a real long-distance trip across China's rural regions. Maybe one day.


Subscribe to Peregrine Online by Email
Posted by hifidel at 8:26 AM

Yeah, it was fun! It sort of left me feeling a little high, to tell the truth.

I liked this line, it rings so true, in life as well as bicycle touring:"I'm glad I chose the path I did."

Great to see you out there! I know you will do the long tour someday. We wonder when will be the next time we're back in China.

good on ya!
Bob and Claire

Book your Ad Space Direct with me.
View prices (packages available on request)
Fill up the request form, and I will contact you to get started advertising here!

hifidel
I am a literature teacher at a private university. That's why I mostly write about books. I love to read nearly anything, but when reading fiction I have a soft spot for fantasy and science fiction. I love to read poetry, good essays, and plays from almost any era. I have wide interests. I like to watch baseball, I love to cycle, I read, and I write poetry. I have lived overseas for all of my adult life, and now pretty much split my time between Singapore and Shanghai. I love to travel, and have seen a lot of places. I do, however, still have a lot more to see too.