Cycling on Singapore's East Side

I did what I said I would do. I spent the day yesterday exploring the system of cycling paths that has newly opened on Singapore's East side, and I have to say that, over all, it gets a big thumbs up from me. It has made cycling in Singapore a whole lot more fun, and I really look forward to seeing the network extend all over the island.

I started my trip from 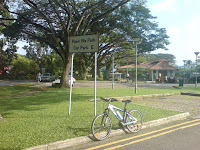 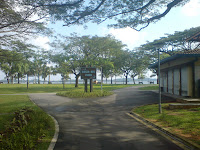 Pasir Ris Park is a pretty location, and was especially enjoyable when I started (mid-morning on a Monday) because it was pretty empty. I've been to the park many times when it was much more crowded than this, and didn't enjoy cycling there before — and in fact had not even tried cycling there in some time. However, the path has been extended over the years, so that it reaches all the way down to the Loyang Government bungalows. When you get to the side of the park nearer to the government bungalows, the paths are especially quiet, and make for very nice cycling.

The Tampines Park connector makes it so that you can extend your cycling trip beyond Pasir Ris Park along, stretching for quite some distance (I made 70 km yesterday, all on the cycling trails linked up through the newly opened park connector system.) 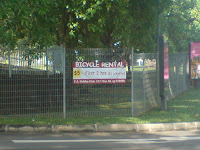 In Pasir Ris Park, as in the other parks linked up through the park connectors (East Coast, Changi Beach, etc.), there are plenty of bicycle rental kiosks, where you can get a bike fairly cheap for the day. The bikes, of course, aren't as nice as the one in the first picture (that's mine), but they'll do for a short ride. I would have hated to be on a rental bike for the 70 km trip yesterday, though. Most rented bicycles are not exactly great machines, but they will service 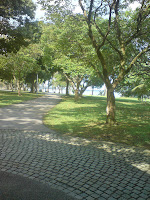 for a more leisurely trip.

The trail through Pasir Ris Park, and those through the various parks connected in the network, is really very nicely put together and maintained. Besides the nicely paved paths, there are lots of rest areas set up in breezy, scenic spots.

You can see lots of interesting things along the way as you cycle along the bicycle trails in the parks. Even the large shipping sites at Loyang and various other points along the East Coast don't detract from the beauty of the area. 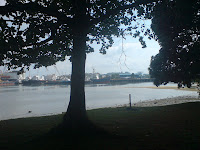 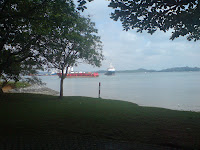 All throughout the trip, while ships, planes, residential estates, and all the other signs of "civilization" are visible, you can also have a real feel for the natural beauty of Singapore (true to the government's hope that this network of park connectors will make it feel like a city nestled in a garden). The surrounding mangrove forest, bird sanctuaries, and various spots where "green and clean" is certainly the rule of thumb make for a very pleasant ride. 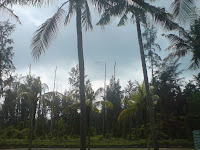 For me, the ships add to the interest of the ride, as do the airplanes that take off from the runway alongside the stretch of path between East Coast Park and Changi Beach 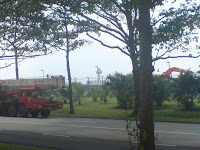 (which may have become my favorite cycling point in Singapore, now that I've been there).

The various parks, especially on the Eastern side of the island, have long been nice spots to cycle. The problem has always been that the trails were too short for even the moderate cyclist. The newly built park connectors are meant to remedy this shortcoming. The circuit itself is reported to be 42 km (some reports have said 48). I detoured here and there to cycle through various parks (end to end in Pasir Ris, Changi Beach, and East Coast Park), and managed to make it into a 70 km trip, without a whole lot of backtracking over the same ground. That makes for a very nice ride. Overall, the trails are shady and have a good breeze throughout the day. I was out from 10 am to 3:30 pm exploring various trails, spending about 4 1/2 hours of actual riding time, and even in the heat of the day found it fairly comfortable to ride because of the shade and wind. There were some portions of the bicycle trails there were not well shaded, but that's to be expected, and didn't at all detract from the trip for me.

There are only two minor complaints that I have. The first is that there are spots where the cyclist is expected to dismount and push the bike across a bridge. While I understand the need for the warning, especially as I have seen some inexperienced cyclists make a mess of some of the overhead bridges and all, it does get to be a bit old. 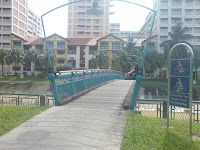 The real issue is that the park connectors often run alongside, or even through, residential areas. While the paths for pedestrians and cyclists are usually separate, it is very common for the pedestrians to disregard this (except when they want to complain about a cyclist making use of their path). For the serious cyclist, this is a nuisance. I would say that for anyone wanting to do serious cycling (like preparing for a race or something), the parks are not all bad, and some of the connectors are very good (particularly the stretches between Bedok and East Coast Park and between East Coast Park and Changi Beach). The connectors that run through the various residential neighbourhoods are definitely not ideal for higher speeds(the stretch through Pasir Ris is not bad, but Tampines and Bedok are maddeningly slowed up by interruptions). When cutting through Tampines and Bedok, I'd recommend the serious cyclist take to the road, and then catch the park connector again from Bedok to East Coast Park. That stretch is a nice run along a very breezy canal, and it cuts through some land that is otherwise a little difficult to traverse. The only drawback is that you have to use an underpass to get through to East Coast Park, carrying your bike up and down the stairs at each end.

The above complaint is actually quite minor, to me, as I would not mind getting onto the roads for more serious trips. And, I really like that the park connectors make cycling trails more easily accessible from the residential areas. I think the irritation of bridges to cross and such is pretty much a good compromise.

The bigger issue I have, though, is the problems you run across here and there along the path with the direction markers. It is not as clear as I'd like in this photo, but you can see 3 arrow-shaped signs on the pole just behind the "Tampines Park Connector" sign. 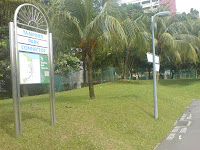 On the arrow pointing left, it indicates that the Bedok Reservoir Park is reachable by heading that direction. But when you head that way, there is a dead end just a few meters down. Instead, you have to cross a bridge and head that direction on the other side of the canal. There are several spots where the indicators are unclear, like this, and result in a bit of backtracking for the cyclist unfamiliar with the path. This is a bigger issue than the bridges, to me, because it is entirely avoidable. The direction markers can easily be make to point in the proper directions, but for some reason there are errors like this on the signs throughout the whole system of connectors. I liked it much better, for instance, that on the path from Changi Beach to Pasir Ris Park, the direction indicators were painted directly onto the pavement, along with larger signs beside the path. That made for a very clear means of pointing the cyclist into the correct direction.

That said, I was very impressed overall with the whole system of trails. It was a fun day of exploration, and I plan to make further exploration of the extending network of park connectors.

And, most of all, I am very eager to see it spread throughout the North, where I live. The cycling paths in my neighbourhood are pretty lame. It would be good to see better use made of some of the very pretty parts of this area that are not readily accessible by bicycle at this time.

Subscribe to Peregrine Online by Email
Posted by hifidel at 7:06 PM

It sounds like a wonderful day. I hope the boys get to share in some of the trails this summer

It really was a lot of fun. And the kids will love it!

Hey, it really seems fun from the pixs that you've uploaded. I want to try them one day...

It really was fun, valkrie angel. We'll all have to go sometime soon.

Book your Ad Space Direct with me.
View prices (packages available on request)
Fill up the request form, and I will contact you to get started advertising here!

hifidel
I am a literature teacher at a private university. That's why I mostly write about books. I love to read nearly anything, but when reading fiction I have a soft spot for fantasy and science fiction. I love to read poetry, good essays, and plays from almost any era. I have wide interests. I like to watch baseball, I love to cycle, I read, and I write poetry. I have lived overseas for all of my adult life, and now pretty much split my time between Singapore and Shanghai. I love to travel, and have seen a lot of places. I do, however, still have a lot more to see too.